You take on the role of Dart, a young frog living with his younger brother, Dash, in a pond near a Tower of Witches. The brothers are floating on their pad, basking in the warmth of the sun while, in the tower, the head Witch is brewing up a new, mysterious potion. Realizing that she requires a frog to complete the recipe, she wanders over to her window and glances out to see the brothers on the water. Giddy with excitement, she conjures a bubble to retrieve Dash and sends him floating up to her quarters. In a panic, Dart leaps off the pad and to the base of the tower, ready to tackle what lies inside to save his brother!

Using a simple drag-and-release mechanic, climb your way through a whimsical tower full of eye-catching biomes, duck and dodge dangerous enemies and obstacles, and triumph over the mysterious Witches of the Tower as you save Dash! 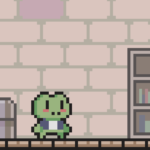 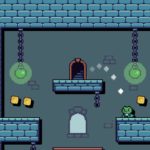